The perfect side dish to bring along to Christmas dinner or to serve up with a hearty barbeque is undoubtedly a creamy potato bake. Cheesy, creamy and delicious potato bake is always a hit at dinner time.

It keeps surprisingly well and is just as delicious the next day heated up in the microwave as it was the day before.

If you want a tasty, simple recipe for potato bake then read on below; 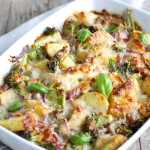 There are a few things you can do to make sure your potato bake is as good as it can be.

The thinner you slice your potatoes the better – there’s something to be said for chunky potato bake but thin potatoes extra coated in cheese and cream is the best in our books!

Garlic is a key ingredient in the traditional French version of the dish, and it’s perfect with potatoes. If you want your dish to be absolutely delicious, so much so that everyone is coming back for seconds then add some fresh, minced garlic!

To ensure maximum potato to cream ratio is achieved, try layering your potatoes and cream – like a lasagne. It will take a bit longer but it’s absolutely worth it!

Add some breadcrumbs to the top

To make the top of your bake deliciously crusty, add some breadcrumbs. They’ll mix in with your cheese and create a delicious browned, crusty top.

If you’re in a rush you can speed the process up by boiling your potatoes for 4 minutes, or cooking them in your microwave beforehand.

Interesting facts about the potato

Ah the humble potato – it’s a cooking staple nowadays and the starchy vegetable is delicious in both warm, wintery meals and summertime salads.

But the potato actually has a long and interesting history. Native to Central America, it was first cultivated by the ancient Incan Indians of Peru around 8000 B.C. When their civilisation was conquered, the potato was eventually carried over to Europe.

Potatoes were later introduced to Ireland, in 1589 and it became particularly popular there before eventually spreading across Europe. The potato became one of the most important ad prominent foods in Europe, because of its role as an eventual staple of the diet for the poverty stricken there. Potatoes became popular because of their low rate of spoilage, its starchiness which satisfied hunger and the relative ease and inexpensiveness of growing it.

The potato was extensively studied and promoted during the 1700’s and found to be of high nutritional value. During the 1800’s a lack of genetic diversity led to large amounts of the crop being destroyed and contributed to a widespread famine, that killed approximately 1 million people.

The potato is extremely important in history and changed the course of history for Europe as it allowed them to keep the masses fed. Today the potato is one of the most important crops type in the world – it’s no surprise then that almost every country in the world have many of their own creative, delicious takes on potato dishes. This is especially the case with many of the countries in Europe, being the staple part of the diet there for so long there are many creative recipes that date back from that time. Potato bakes, based on the French Potatoes au Gratin, is one of them.

Other interesting things to note about potatoes is that they have almost all the nutrients a human requires to survive – they have a very high nutritional value. This is surprising to some, given all the warnings we receive about their high calorie content nowadays.

Potatoes grow under the ground, if they are exposed to light whilst they grow, they turn green and are poisonous. Never eat a green potato!

Poisoning by potatoes can cause hallucinations, paralysis and even death if left untreated.

There is a variety of potatoes, grown in France that is blue.