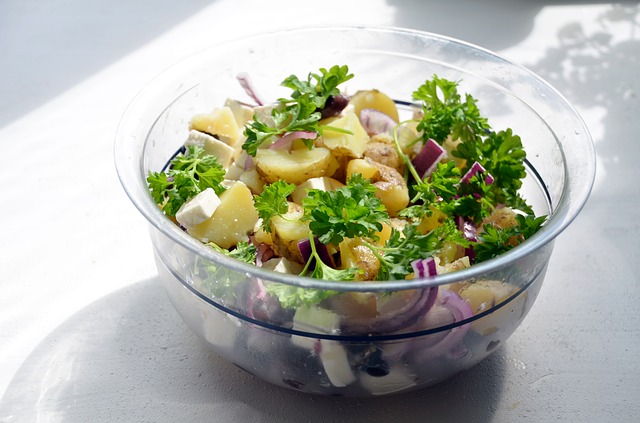 Potato salad is a beloved staple at every Australian Christmas lunch worth its salt, and it wouldn’t be a summer barbeque without a generous helping of this delicious dish.

Potato salad renditions are a family favourite and one of those recipes that everyone has their own little twist on, whether you do them German style with a vinegary dressing or pile onn the mayonnaise, it’s always sure to be a hit at family get-togethers.

If you’re looking for a delicious recipe for potato salad then look no further – this certainly isn’t the healthiest salad you can cook up, although some substitutions could certainly bring down the calories, but it will definitely make you the most popular person at the party! 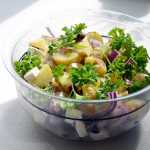 Print Recipe
5 from 1 vote
Contents hide
Yummy Potato Salad Recipe
Ingredients
Dressing
Salad
Instructions
Video
Notes
Important things to remember
Can you freeze potato salad?
Are there any short cuts to shorten the cooking time?
How long can you keep potato salad?
What are some fun things to add to potato salad?
Who invented potato salad?

There are a few important things you should keep in mind when making your potato salad, read on to find out more.

Can you freeze potato salad?

Whilst potato salad will certainly keep a lot better than many other salads owing to its starchy main ingredient and creamy dressing, it really doesn’t freeze well, like most salads.

You’ll likely find that it will go soggy and the texture will probably make it quite unpleasant.

Are there any short cuts to shorten the cooking time?

Whilst potatoes always taste better when they come out of the oven nice and crispy, you can dramatically reduce cooking time by putting them in the microwave instead for a few minutes at a time. They won’t be so crispy, but you’ll get piping hot, cooked potatoes in no time.

How long can you keep potato salad?

What are some fun things to add to potato salad?

The creamy mayo base always pairs well with the addition of spices, such as cayenne, paprika or even garlic powder. There’s a myriad of fresh herbs that will make your potato salad fun to eat, we’ve suggested dill in this recipe but parsley, basil and mint are also popular choices. Vegetable like leek and spring onion are popular to add, and a bit of crunchy celery can add some great texture to your salad without overpowering the other ingredients.

If you want to make it fancy try adding ingredients like smoked trout or salmon, pancetta or capers. Different mustards like whole seed can also elevate the dish. Consider adding things such as hot sauce if you want to give the dish a bit of a kick.

To make it Southern style, don’t forget the pickles or the pickle relish, the tanginess of the pickles pairs perfectly with the creaminess of the dressing – you can’t have fried chicken without it!

Nobody is entirely sure of the answer to this question, but in all likelihood it was probably the Germans after the potato was brought back from the Americas by European explorers.

German potato salads are typically a bit more vinegary then their American counterparts, usually made with olive oil, vinegar and mustard. The mayo version of the salad started to emerge in the 20th century when bottled mayonnaise became more widely available.

If you want to be the hero of the Christmas party spread, you can’t go past a delicious potato salad drenched in mayonnaise and mustard. It’s always a hit for good reason, so whip one up for your next event.