Australian Ninja Warrior is an Australian sports entertainment competition which is a spin-off of the Japanese television series called Sasuke. Australian Ninja Warrior first aired on the Nine Network in 2017. The show features hundreds of competitors trying to complete a number of obstacle courses which increase in difficulty as the show progresses. The show was first announced in 2016 and was openedup for applicants to apply.

Filming took place on Cockatoo Island with Rebecca Maddern announced as the host alongside Ben Fordham and Freddie Flintoff as the series sideline reporter. The show was renewed for a second season which aired in 2018. The third season aired the following year and the fourth season has now been confirmed.

The main premise of the series is that potential contestants must advance through a series of rigorous obstacles, with the aim of becoming the next Australian Ninja Warrior and winning a cash prize which starts at $100,000. If nobody wins the shows season then the prize jackpots and rises by $100,000 until someone is able to eventually conquer the final challenge, Mount Midoriyama.

The format of the show changed slightly for the third season with the most successful competitor going on to win if the $100,000 if they cannot conquer the course, or the growing jackpot amount if they can conquer Mount Midoriyama.

Mount Midoriyama is the final stage of the show – a giant steel structure in Japan. The frame of the structure is made up of criss-crossing bars, sectioned into three areas which a rope ladder, or just a rope at the centre of the structured. Only the most elite players in the competition are given the opportunity to conquer the structure.

To win the title of Australian Ninja Warriors, competitors must press the button at the top of the structure in the short amount of time that they are allowed. The structure is also used in the Sasuke competition and is sometimes used at variable heights during that competition. The course is so difficult that there has only been six people to previously complete it.

Some of the competitors were able to win the first round of the Grand Final but were not able to complete the second round. Fred Dorrington made it to the top of the leaderboard for season 1 but failed to win top prize. The obstacle course featured in round one included; quintuple steps, silk slider, bridge of blades, tyre swing to cargo net, double tilt ladder and warped wall. Later heats got increasingly advanced including the jump hang, spider jump, the big dipper, chimney climb, flying bars and floating stairs. 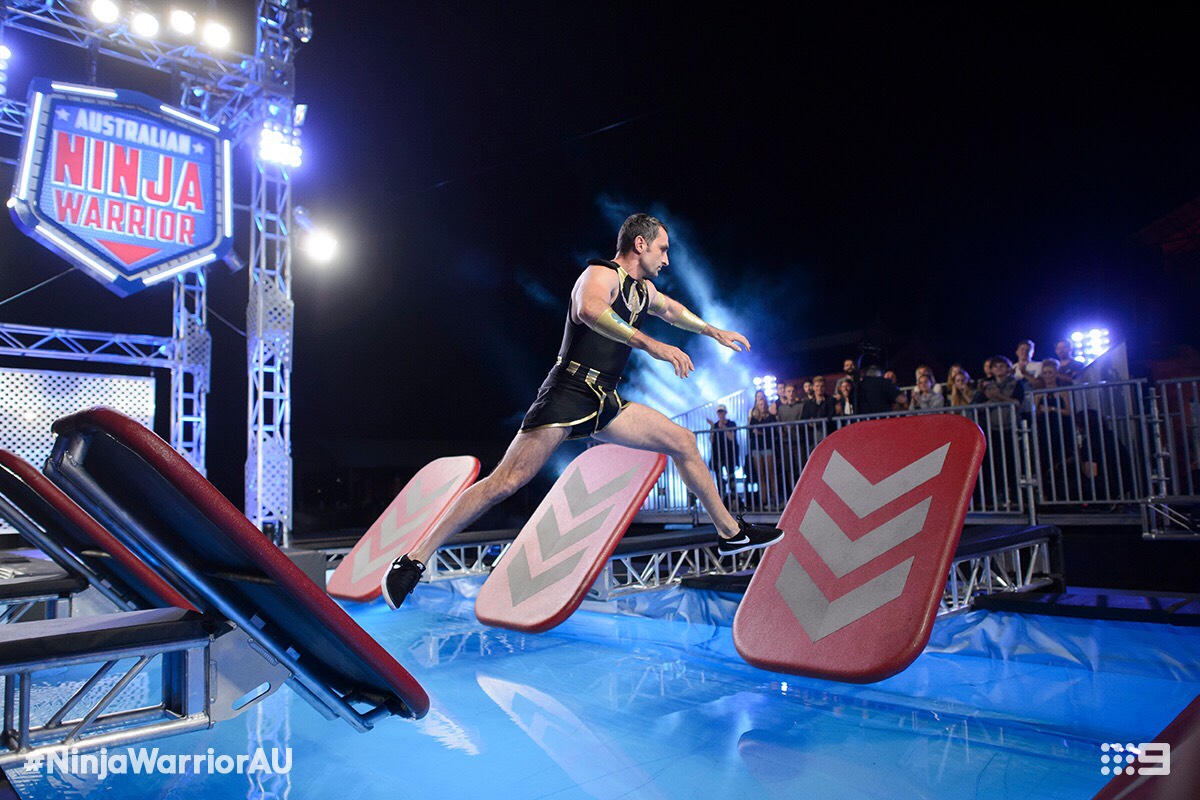 In season two of the show more than 300 ninjas competed, with the top twenty making it to the semi-finals after six heats. There were four semi-final which reduced the number of competitors to the top 8 for each semi who then continued on to the Grand Final.

During the Grand Final, 24 competitors made it through the first round but none were able to complete stage two.

Despite all the ninjas failing, Charlie Robbins was declared the last ninja standing and awarded the $100,000 prize as he was the fastest ninja to reach the obstacle where he was knocked out. This was the first season where contestants made it to the third stage of the course.

Most of the controversy surrounding Australian Ninja Warrior has revolved around some disqualification choices that the hosts and fans did not agree with. The show has strict rules around what counts as a disqualification and some fan and contestants have felt the rules were unfair.

During the first season Fred Dorrington came out on top as the last ninja standing, but his win was not without controversy. Early on in his run during the Grand Final obstacle course it lookd as if his foot had slipped and touched the water, which would have caused him to be disqualified. One of the commentators, Freddy Flintoff however  was not convinced that his foot had touched the water. Bec Maddern and Ben Fordham however disagreed, believing they had seen ripples from his foot after he made his dismount from the Big Dipper.

Whilst the argument was being had, Fred Dorrington made to the cargo net before it was signaled that he was out and he was forced to stop. The footage however was then reviewed and it was decided that the ripples were not caused by his foot, but rather the safety mat. As a result, Dorrington was allowed to start from where he left off and he went on to perform the best overall out of the competitors.

In the recent third season the surprising disqualification of favourite competitor Rebber Maddern during the semi-finals was poorly received by fans and labeled as unfair by many. Aqua aerobics instructor Trudie Horskins was eliminated during the semi-finals despite being expected to finish in a top 10 place.

She lost out on one of the shows weirder obstacles, the rolling log. She did well on the obstacle initially, wrapping herself around it and holding on for dear life as it spun her around in circles down a track at an increasing fast pace. At the end of the track Horskins’ leg was dislocated by the force of the log stopping. The force of the stop knocked one of her shoes clean off of her foot and it dropped into the water below. Horskins continued on through the obstacle course undeterred but unfortunately it was all over for her with the commentators realising that it would mean a disqualification.

The hosts were upset on her behalf but the judges said that the rules were clear on the issue. It was said that it would be unfair if she was allowed to continue through the course without being disqualified.

Later on is the season competitor Zed Colback was also controversially disqualified following a difficult obstacle called the bar hop. Zed fumbled with the bars but didn’t’s stick the landing – he didn’t fall into the water but instead leapt onto one of the safety mats on the side before picking himself up and continuing along the course. Unfortunately host Ben Fordham quickly realized it would mean a disqualification, as the side mats were a disqualifying area.