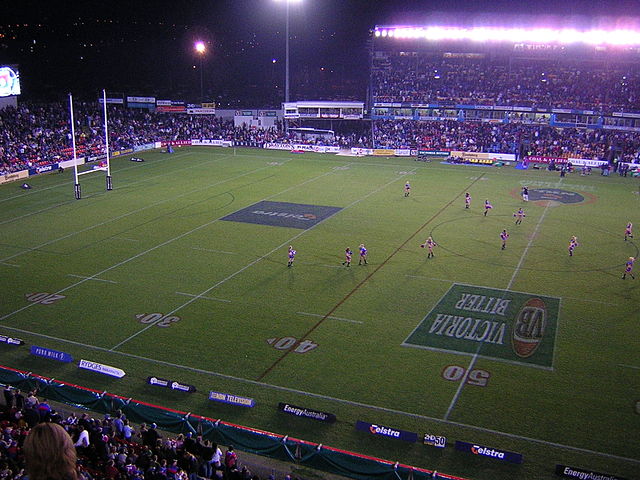 The Newcastle Knights are one of the newer teams in the competition, having joined the NRL in 1988. Many years after the original Newcastle team left the Sydney competition. Newcastle had been asked to join the competition in 1982, but declined at that time; the Canberra Raiders were admitted in their place. The team proved to be successful even from the beginning and was very popular even from the start. They grew from strength to strength throughout the 90’s.

The Newcastle Knights have successfully won two premierships in their history (1997 and 2001), and they are one of only two clubs who haven’t ever lost a Grand Final (the other club being the Wests Tigers). The team has produced some star players including Paul Harragon, Robbie O’Davis, Danny Buderus and Andrew Johns.

That one was for the fans ❤️💙 #NRL #GoHardGoKnights

The Newcastle Knights are owned by the West Group who have managed to turn the club around from making a $4.6 million loss to a $1 million dollar profit in only a year.

The Newcastle Knights current head coach is Adam O’Brien who will coach for the 2020 season. He spent 11 years with Melbourne Storm before joining the Roosters.

The Newcastle Knights mascot is known as Knytro the Knight. He featured the clubs red and blue colours, wears a helmet and holds a sword.

The club is known for having some of the most passionate supporters in the National Rgby League competition. During the years of 2008, 2011 and 2012 they were the third best supported club in the NRL. Their average attendance number in 2008 was 18,750 and 19,186 in 2011, 20,919 in 2012. The team has some notable and high profile fans including Australian mining magnate Nathan Tinkler, Australian politician Kim Beazley and Michael Costa, Miss Universe Jennfier Hawkins, actor Sam Worthington and comedian Felicity Ward. The Newcastle Knights have a number of major sponsors over the years, including BP, Stockland, Flight Centre. nib health funds and Hunter Ports.

A Newcastle Rugby League team was gathered from players in the Newcastle Ruby League with the goal of having the team compete in various competitions. The Newcastle Knights were accepted into the NSWRL competition in 1988. The team had previously been asked to take part in the 1982 season, but they declined the offer out of concern that taking part in the competition would impact poorly on the local area competition. The Canberra Raiders instead were admitted in 1982 by the NSWRL.

The Newcastle Knights were successful from the very beginning and has strong popularity right from the start. By the 1990 season the team was performing well enough to enter the play-off. They won in 1991 and made the finals in 1992, but were beat by the Dragons. The club made the semi-finals in 1995 and won the minor premiership in that year. Between the years of 1997 and 2003 the Newcastle Knights made it to the finals every year. They won the premiership in 1997 following a riveting game in which Darren Allen broke a deadlocked game with a try only seven second before the end of the game. The win was a big morale boost for the local area, following the closure of the area’s biggest employer, BHP. A large proportion of the team during the win was made up of junior players, making the win even more impressive. Unfortunately during the following season the player Robbie O’Davis, Wayen Richards and Aam MacDougall tested positive for performance-enhancing drugs. They were suspended and Wayne Richards had his contract terminated. In that year the Knights finished equal on competition points with the Brisbane Broncos, but second on the point’s differential. In 1999 they made it to the finals but were knocked out by the Parramatta Eels. In 2000 they came in third followed by a premiership win against the Parramatta Eels in 2001. In 2002 the club finished equal to the New Zealand Warriors club but once again fell short on the points differential. Many of the clubs players suffered from injuries in 2004, which resulted in them missing the finals and finishing in 10th place. They struggled again in 2005 thanks to injuries and inexperienced players. In the 2005 season the club experienced their worst start to the season since the 1960s and since officially joining the NRL. Despite the losing streak, their crowd numbers remained high and despite receiving the wooden spoon those years, fan did get to see a six game winning streak towards the end of the season. In 2006 the team lost their coach to the Parramatta Eels but gained Parramatta Eels coach, Brian Smith for the 2007 season. The 2007 season was not a good year for the team both on and off the field. The Newcastle Knights made a good start to the year but they experienced their worst injuries toll since entering the competition. The club also had their reputation tarnished by thretas of legal action by Kirk Reynoldson who accused the club of refusing the play him for fifteen games. The club managed to avoid the wooden spoon for that year however. During the 2008 season, the Newcastle Knights performed well. They unfortunately missed out on winning the final, losing against the Brisbane Broncos in the last round of the competition. The Newcastle Knights had a good start to the 2009 season; they were in second place on the ladder at round 10 but ended up finishing in seventh place. One of their players, Danny Wicks, was revealed to be involved in amphetamines, cocaine and ecstasy and was stood down. During the 2010 season, the Newcastle Knights signed major sponsors, McDonalds and Coca-Cola. During the 2010 season the club finished in 11th place. In 2011 the Newcastle Knights were taken over by mining tycoon, Nathan Tinkler and signed on super coach Wayne Bennett. They finish in 8th place for the 2011 season. The 2012 season proved to be a forgettable one but the 2013 season was much improved, with the Knights finishing in 7th place. During the 2014 NRL season, the Knights played against Melbourne Storm. Close to half time, the clubs forward, Alex McKinnon was in a three-part tackle that left him with fractures to his C4 and C5 vertebrae. Player Jordan McLean who was involved in the tackle was handed a seven match suspension following the incident, and refused to watch the replays, having been overcome with grief.

The NRL held a benefit for McKinnon later in the year, to help with the cost of medical bill and rehabilitation. In 2015 the club were handed their second wooden spoon. The 2017 season saw the Newcastle Knights celebrating their 30th anniversary in the NRL, however they did not perform well and claimed their third wooden spoon. In 2019 they finished in 4th place.

The Newcastle Knights hold open trainings each week for members and fans to attend,. During the training session, fans are welcome to watch the players in action.

The Newcastle Knights take part in a number of community programs designed to make a difference in the lives of people across the Newcastle region. The Newcastle Knights participate in four key areas of community involvement including charity, education, culture and junior development. They support a number of charities that deal with issues and areas such as children and youth concerns, health and well-being, welfare and poverty relief and emergency services. They aid a number of community groups that organise events or programs around rugby. They also take part in a number of different fundraising events and awareness raising events. The club regularly donate coach and player time, tickets and merchandise to help raise funds or as prizes for fans. They are involved in a number of junior development programs including elite pathway programs.

The club regularly get out in the community to do good. Recently they have been involved in a number of initiatives to help raise awareness and funds around issues of bullying. They also done activities such as inviting members of the cerebral palsy alliance to take part in their round 16 game.

Community groups and charities are encouraged to request merchandise, player appearances and autographs from the club – requests can be made through their main website portal.

Like many of the NRL clubs the Newcastle Knights are very committed to supporting their local community.