In a brave confrontation, Kate Langbroek’s son has questioned, on Hughesy We have a Problem, why he isn’t allowed a smart phone.

Kate Langbroek’s 14-year-old son demanded to know why he wasn’t allowed a smartphone despite all of his friends having one. And she certainly wasn’t impressed when Dave Hughes simple gave him one right there on the show.

She discussed how she and her husband had had a proper conversation regarding the matter and came to the conclusion that “this is the worst age to give a teenage boy a phone” explaining that it gives them easy access to photos and pornography.

Langbroek’s sun Lewis was on the show and told panellists that he received a flip phone on his 14th birthday but desperately wanted a smartphone so that he could “fit in”.

Dave Hughes ultimately decided that he would solve the issue himself by giving Lewis a smartphone for himself. However, Langbroek certainly was not happy about it.

She went on to discuss the fact that everyone seems to fear not having a phone as it will make them feel left out. She questioned why it was such a big deal being different in today’s world and why we couldn’t just accept things as they are.

She continued to say that there was no reason to give children something because “it makes you feel better about not being a proper parent”.

As Hughesy handed over the smartphone to Kate Langbroek’s son Lewis, she said that he would simply “f**k it up for us” by doing so. Hughesy immediately questioned that language that she was using and Lewis was quick to respond saying that if they had a swear jar at home “I’d have a phone already”.

People took to social media to express their views and it was interesting to note that there was certainly a mix of responses.

Passionate about writing and sharing my experiences with others. Zac has a keen interest in sport and politics in particular. Contact: zachary.fyffe@bestinau.com.au 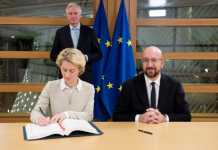 Celebrity
Channing Tatum and Jenna Dewan seem to be amicable after the former married couple has reached a child custody agreement of their 6-year-old daughter...

Entertainment
Jamie Foxx’s compelling performance in the 2019 drama Just Mercy earned him another award. This time, from the African-American Film Critics Association (AAFCA) Awards The...