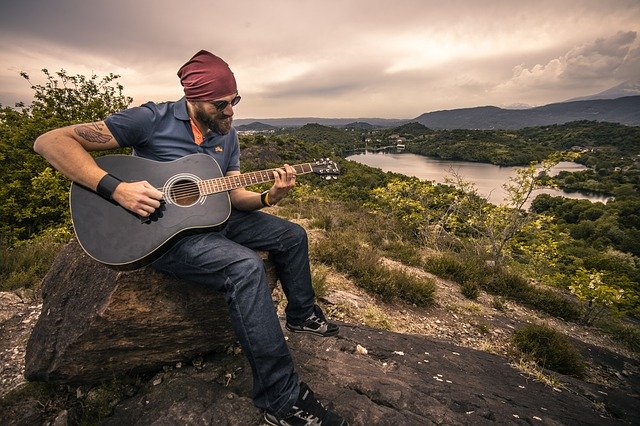 Learning to play the guitar can seem like a daunting task. But it’s one that millions of people try and succeed to do across the world.

The guitar is one of the most popular instruments, as it is widely used in all forms of music that we hear and love, every day. It is also popular for it is not too hard to learn majority of songs once 4 chords have been learned, and the ability to sing whilst playing the instrument.

When trying to play the guitar, there are some basics you have to learn. These are the basic building blocks that make up the foundation for playing the guitar. These building blocks are learning about reading chords, chord theory and chord progression. Once these have been learned, it can be relatively easy to play majority of pop songs.

Furthermore, once skilled enough, you can start to make songs of your own using chord progression and experimenting with chords to see what sounds and combinations you can make.

What are chord progressions?

Chords are what make the music for the guitar. The chords tell you where to place your fingers and in what combination. When these chords are put together and played, they create a song. Individual chords by themselves just make single sounds, but when placed together they create a tune which can be recognizable to people. This is the basic premise behind chord progressions. The chords create music when played in progressions.

The chromatic scale is broken up into 12 pitches. These are displayed on the guitar by the frets. On the guitar, each fret is divided from each other by a metal strip, which can change the pitch of a string by changing the length between the string and the bridge. To play chords, the chromatic scale is used to put notes together. When three or more notes are played together, it creates a chord.

On chart displays of chords that you can find online at Chordify, you will see five horizontal and six vertical lines. These lines represent the strings on your guitar, or fretboard. On the chart, you should notice that there are unfilled Os, Xs and filled Os. The filled Os often times have numbers in them, which represent which finger you should be using. Unfilled Os designate open chords, filled Os designate strings you hold down to play the chord and Xs designate strings you don’t play for the chord.

Chord progressions are written with the Nashville Numbering System, and are written in the form of roman numerals.

When a chord is created, the numbering system will note what scale degree the chord is created on. I is the root, IV is the fourth note in the scale, V is the fifth note in the scale. The progressions are able to be played in any key, allowing for an unlimited amount of sounds and combinations. Because they can be played in any key, there is so much variety within the progressions, and this is the reason why that most music will be using the same progressions over and over again but in a different key, which is why they sound so different.

Basics of guitar notes and chords

First, the distinction between a chord and a note.

According to Toronzo, as a beginner, there are two different types of chords that should be learned about: open chords and barre chords.

Open chords involve using the first three frets on the guitar and will often contain one or more open strings. Open chords are essential for a beginner to learn as they will open the door to more complex chords such as barre chords.

Barre chords involve playing with two fingers and holding down all or most of the strings on the guitar’s fretboard, across numerous frets. The finger is then moved up and down to create different sounds and notes.

The next step is learning to read guitar tabs and chords.

Guitar tabs are used to tell the reader what chords to play, to play a particular song. The tabs will show the chords from left to right. The six lines designate the strings on a guitar, and on these lines there will be numbers. These numbers represent which frets you should be holding down, with 1, 2 and 3 designating the first, second and third fret. Strings with no numbers on them means that you do not play them.