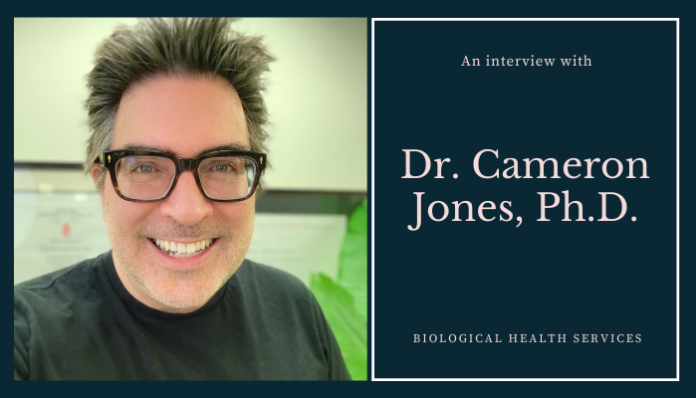 Dr. Cameron Jones, Ph.D. is the founder and chief operator of Biological Health Services, which specialises in mould assessment and restoration. With an extensive background in microbiology, Dr. Cameron Jones has a deep scientific understanding of how mould grows in the home, particularly following instances of water damage.

Dr. Cameron Jones was kind enough to answer some questions about their work.

Can you tell us a bit about your background in microbiology?

After leaving school, I went to university to do a Bachelor of Science. The way Latrobe University was set up at the time was that there was a strong focus on Biological Sciences. From the moment I walked into the microbiology lab, I felt at home. I loved culturing various different microorganisms, seeing the different cell types and cell components under the microscope, and following the different biochemical reactions and illnesses and health and applied science processes that microbes were involved with.

I always intended to follow-on from my Bachelor of Science and go into medicine, but I found that I loved microbiology so much that I just kept going. And immediately on completing my undergraduate degree, I moved to Swinburne University of Technology to do industrial microbiology as a postgraduate degree. That then led on to a PhD at this same university, which also had a strong focus on applied microbiology and was on fungal growth dynamics. These were challenging but happy years and solidified my love of fungi.

What prompted you to perform water damage and mould inspections?

When I was at Swinburne University of Technology, I regularly taught in the public health stream of the undergraduate and postgraduate science courses, especially in Environmental Health. A lot of those students would go on to become health inspectors and work in various aspects of food sciences or quarantine services, and in the public sector. I was always taken with the fact that although many microorganisms cause disease, many more industrial processes take advantage or exploit microorganisms to fulfil various tasks.  Think fermentation of wine or cheese, or the production of antibiotics or industrial chemicals like citric acid, and even the treatment of sewage.

Because I was always interested in the health implications of microbiology, one day, someone rang me in my office and told me that their wife had become sick from being exposed to water damage and mould and could I come out and assess it? I was a bit dubious about this, not realising at the time that fungi could cause illness apart from direct infections, but eventually I went out and that began my love affair with investigating the built environment for evidence of microbial contamination. In working with this particular person, I started to delve into the literature and discovered that there were some interesting articles talking about something called ‘sick building syndrome’. This talked about people who appeared to become sick and showed symptoms in certain workplace buildings, and sometimes this was linked to aspects about the building itself, like the types of materials inside the building, its state of repair, or how the air handling system worked.

How long does it take for mould to grow following water damage?

When a building becomes water damaged indoors, this is an abnormal situation. Mould spores are all around anyway, and if a mould spore settles onto a surface, which is damp, then the spore can germinate and begin growing. Germination times depend on temperature and availability of nutrients, but growth can start in as little as 5hrs and be well underway at 12hrs and often 100% of settled or dormant spores can germinate within a 24-hr period. This is called the cumulative frequency of spore germination.

Water damage is the single-most favourable indoor building condition favouring the mould spore life cycle as it transits from a dormant state to an actively metabolising state. This occurs very soon after the spore lands on the water or the water touches the spore and the spore swells, and a germ tube emerges from the enlarged spore. The germ tube then begins branching and forms a mycelium which defines the new colony. Mould growth will occur easily within the first 24 hours after a wetting event, and the growth rate will continue whilst conditions are favourable.

What are the health impacts that mould and poor indoor air quality can have?

The dominant health impact of mould is respiratory issues and allergies. Think of an asthma reaction or a cough or irritation to the sinus, or hypersensitivity pneumonitis causing shortness of breath due to lung inflammation. However, the literature is full of clinical evidence supporting the fact that mould exposure can cause more than just direct infection or allergic-type illness. Mould is known to cause serious immune compromise, which can be evidenced by a range of neurological adverse health impacts like brain fog, difficulty thinking and even depression. New research also shows that exposure to water damage and mould causes insomnia and excessive daytime sleepiness. There is also clinical evidence that dementia has a fungal infection component, and emerging research shows that treatment with antifungals reduces confusion and leads to memory repair.

How long does it take for you to complete an inspection?

The best way to assess someone’s home, which might be suspected of having a mould problem is to of course, first, to determine how long the occupants have lived in the home, what type of symptoms are being experienced if any, when did the symptoms start to occur, and, if the occupants spend time away from home, are their symptoms reduced?

To assess a home, it is necessary to evaluate, not only the visual evidence that you can see by moving from room to room, such as bubbling paint or mould odour or water staining, but also to take samples of the air to assess the indoor air quality. This measures the dirtiness of the air. That is, what’s in the air; is the indoor air dominated by skin flakes, is there evidence of dirt and debris, building material fragments or diesel/road particulates? It also determines how many mould spores there are, and what types there are, and the indoor air MUST be compared to the outdoor air. The outdoor air is considered normal and should present with approximately 500 to 1000 spores per cubic meter of air.

The aim is the measure the spore levels on a room-by-room basis. A comprehensive indoor air quality and mould assessment should sample all habitable rooms and of course, any rooms that are suspected by the occupants of being problematic.

When we do inspections, we assess all rooms, including the roof void, and the subfloor. Many people aren’t aware that their roof void is the mould reservoir, especially if they have a tiled roof.  A tiled roof has many gaps which over time cause debris and mould spores to accumulate on porous insulation.  When the roof void gets damp, which easily occurs through storm damage, slow leaks and thermal heating/cold cycles, the spores easily enter into the habitable parts of the home around downlights and other ceiling penetrations like vents. This is so often the hidden and root cause of so many home-mould problems. The time it takes to perform a comprehensive site inspection with sampling for an average two-bedroom house for all rooms is approximately two hours. And for a three to a four-bedroom house would be approximately three hours. Then the lab work begins.

What kind of recommendations do you give if you identify mould in someone’s home?

Obviously fix and repair known leaks. The principal recommendation is to perform source removal of the water damaged building elements. This is a mandatory step, followed by filtering the air through a HEPA (high-efficiency particulate air) filter. Visible mould on surfaces like timber will need physical removal and is best performed by media blasting with dry ice under containment. Visible mould on plasterboard is best cut out and replaced with new. Most antimicrobial treatments sold through the water restoration industry are low-grade disinfectants, and at best are sanitisers. Fogging and aerosol treatments should always be avoided since this does not reduce the allergen risk of remaining spores, and the chemicals used are unlikely to contain sufficient chemical energy to stop fungal growth.

Their use is snake-oil, and if consumers are offered such dubious options, especially in the residential tenancy market, they should demand quality peer-reviewed studies validating their suitability for mould treatment on building materials. Unfortunately, proven aerosol and fog treatments like hydrogen peroxide and chlorine dioxide tend to only work when the chemical concentrations are very high and are definitely unsuitable for domestic use. Surface mould and growth from settled spores onto porous materials like carpets, or drapery or personal property like clothing can be cleaned by commercial dry cleaning.

With the world becoming increasingly polluted and urbanised, is there any hope to have cleaner air quality in the future?

Changes in building practices and industrialisation and urban concentration mean that it is less likely that we will have cleaner air quality into the future. I’m somewhat pessimistic mainly because climate change means that we are having warmer and wetter winters and warmer and dryer summers. And this then impacts on how a home is used and on the severity of building-related microbiological attack after heavy rains and storms. Increasing building construction speeds, often means that corners are cut, and even concrete slab foundations are known to contribute to long term moisture damage at floor level, which is a risk factor for respiratory disease, and off-gassing of chemical toxins. Wetter winters will mean that timbers used in construction will need to be shielded from water damage during new home construction or treated to make them more durable or mould resistant.

The best we can do is to call out sloppy practices and highlight obvious building defects and always insist that whenever unwanted water enters a home or invades a building undergoing construction for any reason that it is immediately addressed at the source to stop further water ingress and accumulation. And then, all building elements must be immediately dried in the first 24 hours, or stripped out completely, including any porous insulation in walls, floors and ceilings. There is almost no way to retrospectively stop mould after water damage. So, if your insurer turns up days or weeks later to assess the situation, by that stage, the hidden microscopic problems are likely to be very serious and strip out is the only option. It is best to not try to band-aid these microbiological problems, and it’s usually cheaper to simply replace those parts of the building that have become water damaged and mould affected.

Thank you for sharing your thoughts with us!
You can follow up with Dr. Cameron Jones at www.biologicalhealthservices.com.au or www.drcameronjones.com