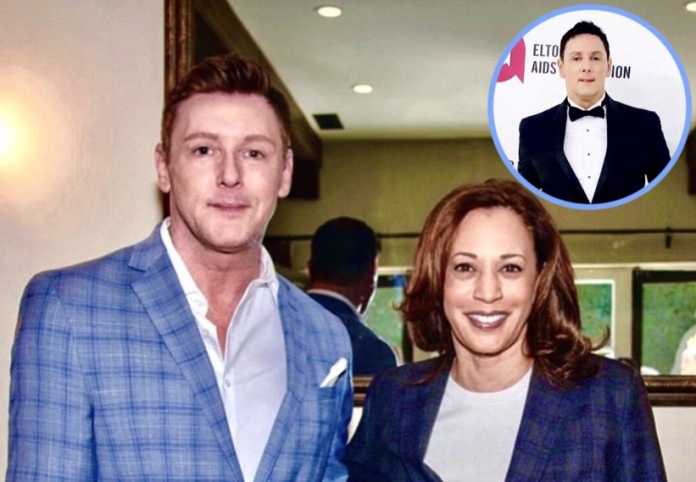 Strewth! That’s a lot of plaid… Sean Borg and Senator Kamala Harris clearly have a similar fashion sense if this picture is anything to go by. Those blazers are ever-so “matchy-matchy” don’t you think?!

The British Entertainment personality was all smiles last year when he thought he’d backed winner in Kamala in her quest to become the President of the United States.

And although she may not have become the USA’s first female president, she has become the first ever woman of color elected US vice-president. And that’s just marvelous darlings!

Borg — known for his work in the famous Trivago Hotel advertisements along with the help of his friend Michael Kraut — a former Los Angeles Deputy District Attorney and Criminal Defense Lawyer, arranged an event that debuted Harris’ political climb.

“I’m backing you one hundred percent,” Borg told the Senator when they first met at Kraut’s fundraiser held at his Los Feliz home in April last year.

In early 2019, vice-president elect Harris — a former California attorney-general and the mixed-race daughter of Indian and Jamaican immigrants announced her bid for the presidency only to back out of the race ten months later — much to the disappointment of many.

Harris had broken many barriers and her path was a promising one, but according to reports the campaign was struggling financially as she struggled in polls, surprising many with her shocking announcement to quit.

Kraut, was a firm advocate for Harris during her rise in the political world — serving as a member of her finance board. He was recently quoted in the Daily Herald saying, “Harris suffered early on from too many people telling her what to do.”

Harris was back in the race to Whitehouse months later when Presidential candidate — now president-elect Joe Biden confirmed Harris as his running mate in August, making her the first woman of color on a presidential ticket.

Now as Vice President-elect, Harris is set to take her rightful place at the Whitehouse. In her powerful speech that came just days after the election at an event in Delaware, Harris thanked Black women on a global scale, saying they are “too often overlooked, but so often prove that they are the backbone of our democracy.” “While I may be the first woman in this office, I will not be the last,” Harris said. “Because every little girl watching tonight sees that this is a country of possibilities.”

On his Instagram page, Borg wrote: “#madamvicepresident Kamala! @kamalaharris I supported you from the start when you were running for President, and I attended your first ever fundraiser and raised funds for you and attended subsequent other events in support of you. I am so proud of your journey and your success today! Joe wasn’t my choice for the Job — you were…. but at least now you have an office and a bedroom at The Whitehouse @whitehouse, so that’s a good start…. and one day the Oval office! Congratulations to you and @joebiden — It was a tough one — and a very close one…but you did it!”  @seanborgla  #kamalaharris #joebiden #seanborg #election2020

Borg, who is based in Los Angeles, told Fab World Today, “It was a privilege to meet and support Senator Kamala Harris on her political climb. I knew she would make it to the Whitehouse somehow. She has immense presence that cannot be ignored.”

“One day Madam Vice President and the next the President. Now that’s an exciting thought,” he added.