As the 2020 Olympics approach, you can easily imagine the fact that Japan is gaining so much attention in the world. While its easy to categorize Japan as the country known for anime or technology, often times you will come to find out the country holds much more depth in its culture and history.

Meet Yoshiteru Ueda, The 2nd generation master/soon to be heir of Japanese Nohgaku the Ueda family.

May 28, 1988 Born as the eldest son of Takuji Ueda,from an early stage, Yoshiteru Studied Nohgaku theater and performance under his father, Takuji Ueda, and uncle Takahiro Ueda.

Participated in the Sibiu Theater Festival in Romania and other overseas performances in Slovakia and Bulgaria.

With the support of Yoshiteru Ueda we conducted an interview to go deeper into the essence of Nohgaku.

Nohgaku is derived from the Sino-Japanese word for “skill” or “talent”, is a major form of classical Japanese musical drama that has been performed since the 14th century. Developed by Kan’ami and his son Zeami, it is the oldest major theatre art that is still regularly performed in Japan today. 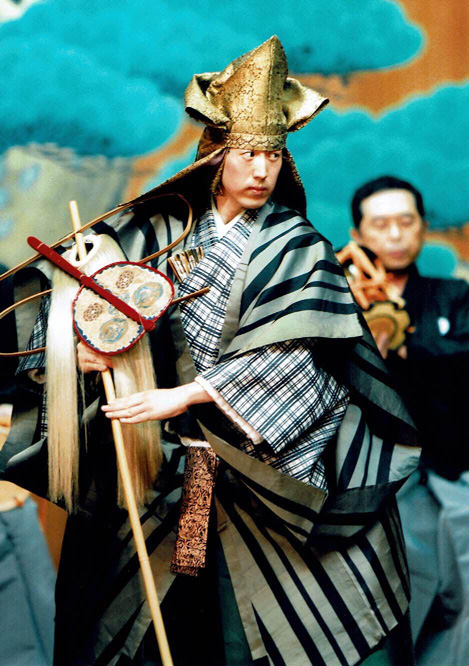 Yoshiteru shared with us.

Noh is a “traditional performing art” that was created by Zeami and others 650 years ago and can be said to be the source of Japanese culture and performing arts.

I can explains the essence of “Noh” using three words: “growth of mind”, “dialogue with predecessors”, “tradition and lore”. In the world of Noh, you can be scolded just by making one mistake during the performance. During the Meiji Restoration era here in Japan, those who made mistake during the performance was told to commit seppuku, a form of Japanese ritual suicide by disembowelment as to restore honor for themselves or for their families.

When Noh was born, it was during a period of Yoshimitsu Ashikaga, the third general of the Muromachi period, right after the time “the long North and South Korean wars” finally ended, and people finally started living peacefully.

Noh was created by the hands of those who survived the cruel and painful times during war. Therefore in my opinion at those times it was necessary for people to ask “What is human life?” “How should we live with humans?” I think that it is the story of Noh.

What did the author think when choosing this particular expression?

After thinking about these things, worries, and putting them into ourselves, we add our own interpretation and express our own “feelings” in a limited expression method called Noh.

Rather than tell the surface of what you learned, identify the “essence” and tell the “core” part. I think this its self is the important “tradition” Noh speaks of.

And I also think Noh is “the traditional performing arts” Japan embraces.

This insight by Yoshiteru allows such a deep perspective into Japanese culture and most importantly guide that helps us answer the question how did Japan come to be and why is it the way it is. The beauty and uniqueness of its culture is such that continues to mesmerize the global community. Some may be searching through the web to find the ticket for Olympics or may be most people have already packed the suitcase for the amazing journey ahead. What ever the circumstance is and while you’re at it, it may be a good idea to get one more ticket to experience the traditional art of Nohgaku.