It appears that Wi-Fi will soon be forgotten. Many believe that Li-Fi or light fidelity is the new stage of the wireless internet technology. What some describe as “100 times faster than WiFi” might replace the traditional wireless internet, with speeds from 1Gbps to incredible 224 Gbps according to early laboratory testings.

Replacing the wireless internet with a new transmitting technology might sound like a fairytale, considering that majority of us are still struggling to get decent Wi-Fi and home internet speed. So, from a point of a standard internet user, having a wireless connection of 1GB per second does seem impossible. However, as technology keeps improving, Li-Fi internet connection might be closer than we think.

How is Li-Fi different?

If the name didn’t give it up already, Li-Fi is based on a light source. It’s a VLC or Visible Light Communications system, which uses standard LED light bulbs to transmit data. As a high-speed bidirectional network, it uses light bulbs to form a wireless network wherever the light exists. This means that you would basically watch videos or download data through lights. So, how can it be faster than Wi-Fi?

Well, Wi-Fi technology uses radio frequency to transmit data. The signal is spread out in a radius from an access point or a router. Li-Fi, being a VLC technology, uses light bulbs to transmit signal. When signals are transmitted through light, they are easier to accent in one area, producing stronger and faster wireless connection.

The key “ingredient” in the hole process are LED bulbs, as they can be quickly switched on and off. This process is quicker than what our eyes can detect and by using special photoreceivers this rapid light “flickering” is transformed into data.

Li-Fi signals are more advantageous than Wi-Fi as they are not interfering with other radio signals, so the technology can easily be implemented on aircraft and other places where the Wi-Fi connection was causing interference. In addition, the spectrum of visible light is 10,000 larger when compared to radio waves.

Can this actually work?

The Li-Fi technology was presented by Harald Haas from the University of Edinburgh in 201. As a founder of the pureLiFi company, Harald was the first person to reveal that LED light flickering can actually transmit data, more than a standard, cellular tower.

This technology was originally tested back in 2015 when a group of scientists tested it in an office set up in Estonia. The pilot project showed an average speed of 1GB per second and was designed to enable industrial data communication through the light.

Are there any drawbacks?

When Harald Haas created the pureLiFi company he believed that the new, light-based wireless technology will solve all Wi-Fi’s problems. Speed, capacity, and availability would be improved as well as energy efficiency. One of the most obvious improvements is speed, as all early testing stages concluded that Li-Fi’s speed definitely wins Wi-Fi’s.

In addition, as it transmits data through light signals it will be much harder for your neighbors to “steal” your Li-Fi, as visible light is less likely to be interfered with and the signal cannot go through the walls.

The company officials explained that one of the main questions is if the signal exists when there is no visible light. If all light power is turned off, the connection would be lost. However, this technology is able to dim the lights low enough so that the room is dark and still have enough signal to transmit data. This would mean that the lights would be deemed to 60 lux, enough to keep Li-Fi transmitting on, while the users are not being distracted by light.

Originally from Belgrade, Serbia but now based in Sydney, she is a writer and a digital marketer but also a true Star Wars fan, who lives and breathes everything digital. Contact: news@bestinau.com.au

Web Development vs Software Development: How to choose between the two?

Are you Planning to Build a Video Chat App? Read for Detailed Insights! 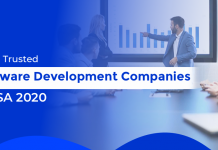 The Top 10 Trusted Software Development Companies In The USA 2020

Study finds that ‘fake news’ spreads faster than the truth

Even after death, genes remain alive